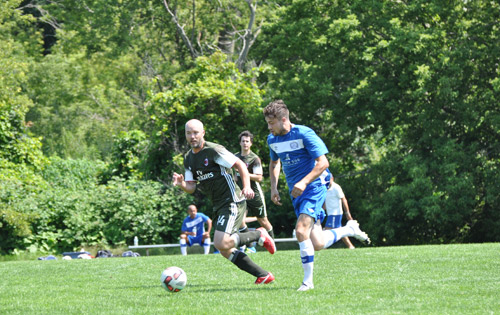 MCMII took on the 3rd placed Lakers at shell park this weekend. The first fifteen minutes saw little action with few chances made from either side but an even game. The closest chance was shot by Nico Corra which was well saved by the Lakers keeper and a shot from just inside the MCM area which was well dealt with by Greg Marshall.
Twenty minutes in Lakers took a free kick which saw cross shot wizz past marshals half.
Apart from that a dull first half.  Half time 0-0
The second half started the same as the first with little created by either side.
On the 60 minute a rare MCM break away saw Chris Francis take the ball from the half way line and at the second attempt put the ball past the Lakers keeper 1-0
Five minutes later it could have been two for Oakville but this time Francis could not convert from a Leeru Buckner through ball.
The 70 minutes in Lakers created a couple of good chances which finally paid off with a low shot going past Marshall 1-1
The rest of the game saw the same old nothing from either team until the last two minutes when a great ball from mike Pesic saw Leeru Buckner net the winner.
The last couple of minutes saw the Oakville side retain possession to see the game out.
Final score in a very dull game 2-1 MCMII.